The Church of St. Lawrence

The Church of St. Lawrence, Lohja, is one of the most remarkable medieval churches in Finland, outstanding because of its exceptionally rich murals. The earliest documentary information on the congregation and church of Lohja dates back to the late 14th century. It is apparent, however, that Christianity had reached the district much earlier. By the time the present church was completed the congregational life in Lohja was already highly organized and well established.

Research has shown that a church, probably wooden, with a sacristy of stone on its north side, stood on the site of the present church, at the latest, in the 14th century.

Apart from the still standing greystone walls of the sacristy, the present stone church must be considered the result of uninterrupted building which spanned perhaps some twenty or thirty years. The three‑naved church was vaulted from the very beginning. The church was presumably completed under the reign of Bishop Konrad Bitz, in about the 1480s. But the church assumed its final form in the 1510s, when the vault and wall surfaces were decorated with monumental frescoes. The murals are dated from the coat of‑arms of Arvid Kurki, the last Catholic bishop (1510‑22) of Finland, to the left of the chancel window.

The series of murals, painted al secco, follow a definite sequence, primarily the chronological
sequence of the ecclesiastic year, with the events of the Old and New Testament intertwined.

The narrative series of pictures begins from the right of the chancel, with compositions depicting the
creation of the world and the garden of Eden. The narrative continues clockwise around the church until it ends with the Last Judgment, on the left of the chancel. The focus of the narrative is the Passion Story mural at the western end of the church.

The running narrative of the murals is complemented by illustrations of the lives of Apostles and Martyrs on the pillars and in the webs of vaults. The decorator is not known by name but he is believed to have been of the school of Albert the Painter (ca. 1440‑1509), the Swedish church decorator. 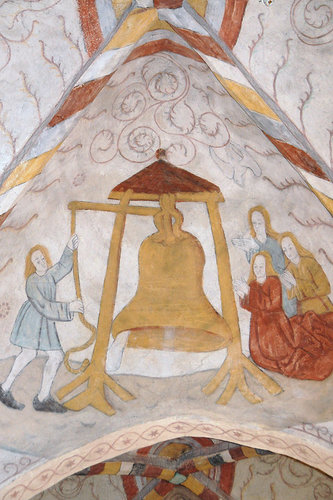 Sculptures and other items

Only a few wooden sculptures have survived from the medieval furnishings of the church. The most remarkable is the rood between the chancel pillars, believed to be a Finnish sculptor's work from the late 15th century. A sculpture of the Patron Saint of the church of Lohja, St. Lawrence, dating back to the early 15th century, hangs on the southern wall.

The brass chandeliers date back to the 17th and 18th centuries. The altar is decorated by a large seven‑branched candelabra dated 1737. The hourglass of the pulpit is of approximately the same age. The hymn board by the sacristy door, in Rococo style, dates back to 1766.

A cast‑iron coverplate of the brick tomb of Thomas Paccalenius ‑ the parson of Lohja in 1762‑84 ‑ and his wife is placed in the floor of the chancel.

Another tomb of the 18th century is close to this, a votive stone procured by G. A. Söderholm, a local judge, for his wife, and attached to the eastern wall of the chancel. In the floor to the right of the altar there is a memorial slab donated in 1968 by the Rennerfelt family. The only fixture of the church remaining from the 19th century is the Neogothic pulpit of 1845.

The latest extensive repairs to the church were carried out in two phases. In 1955‑1957, Oskari Niemi restored the ornamental paintings liberating the vault and wall surfaces from the superimposed paintings of the 1880s. The westernmost vault of the middle nave has been preserved as an example of the method of restoration as practised in the last century. Architectural restoration and repairs were carried out in 1966‑68 under plans drawn up by Professor Esko Järventaus. In this connection, all windows and doorways were restored to their original shape.

The Belfry and churchyard

The belfry in the churchyard has a lower part of
mediaeval origin while the wooden upper part dates back to the 1740s. The mortuary chapel next to the belfry was built in 1824. Another chapel building, off the western end of the church. is of approximately the same age. 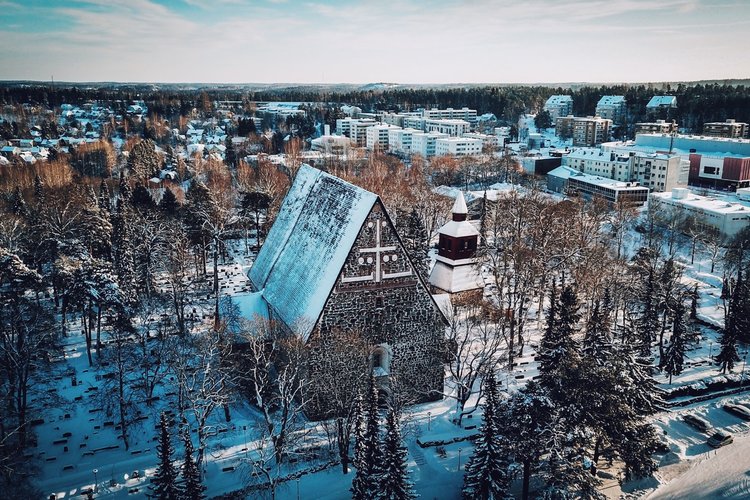 Safety in the church

A 24h CCTV in operation for your safety. The church is equiped with smoke detectors and a defibrillator. Smoking in the area is not permitted. In an unlikely case of an emergency it is important to follow the orders given by the staff and the authoroties. This church has 3 emergency exits and they are all marked with green exit signs.

In case of an emergency:

RESCUE the ones in danger

GIVE FIRST-AID to ones in need

LEAD the rescuers to the site

In case of fire: